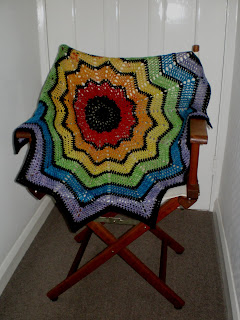 I started this blanket back in January when I bought three white and one black ball of Bendigo Woollen Mills Luxury 8ply. The white balls I split into six balls and proceeded to dye them each a colour of the rainbow. Once they were dry and balled up they were packed into my luggage as I prepared to move to England. During my stopover in Sydney to visit family before taking off on my UK adventure I started hooking away. And I kept hooking away once I arrived here too. After a bloody drama with the blocking--not real blood, just the dye bleeding >:S Grrr--I washed it over and over until the colours stopped running and crossed my fingers they wouldn't run afresh when it was in the hands of its new owner. Unfortunately there are a few bloody marks which is frustrating and they wouldn't wash out with all the extra washing. At least the colours in general are still ok though they are not quite as bright as before. 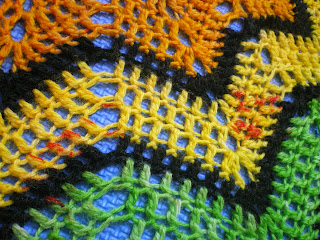 My only regret for lack of forethought was to put some lanoline in the mix when washing them at the end of the dyeing process. The coloured wool is not as soft as luxury is when straight from the shop. On the whole the pattern is funky and the rainbow colours will keep the new mum happy. I'm sure her precious son will love staring at the contrast of bright colours. I forgot to measure it so I'm not sure how big it is. It was suppose to be 40cm diametre according to the pattern but I don't know if I did the same amount of rounds as they said to. It will make a good pram blanket or warm wrap. Being winter back home I'm sure it will get good use. 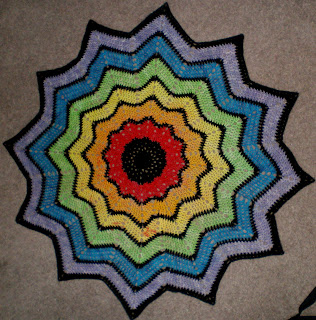