through with the hood

Aye! It's been a busy few weeks. Last week was half term so I felt I had barely anytime to myself and when I did I had stuff to do. Bit more like motherhood I suppose. I was tired all week too. The week before I went to Iceland for a holiday and before I went I managed to finish my hood so I could take it with me. 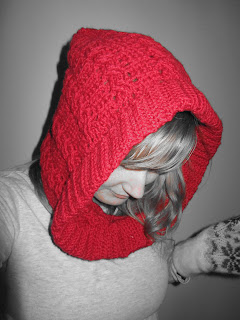 It's Through the Woods by Kalurah and I did the crochet version. I didn't use the yarn suggested and substituted it with Berroco Ultra Alpaca in this lovely red. I chose a hook to match the gauge but it's seems huge. Alpaca is lovely yarn but I'm not sure it was the best choice. I think a stiffer yarn would have got the neck to stand up better. Mine just flops down all the time which I'm not so happy about. And now that I've looked at the pattern photo again I'm sure mine IS huge. It's a bit too big for me really and doesn't quite sit nicely. I was tempted three quarters of the way through to frog it and do it again with a smaller hook but I finished it all off as I wanted to take it to Iceland with me. I hate disappointment. I still like the hood. I just think it would be a bit better being a bit smaller. Maybe I'll undo it one day... Anyway, enough whining. 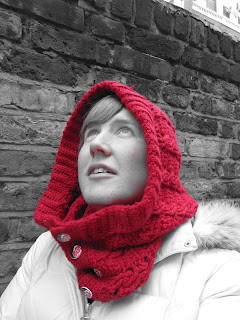 I attached some yarn to neck near the buttons on either side and wove the strings through to the top. I tied them together in a bow so I can use them to pull the hood opening tighter around my face when I want it more snug. That helps a bit. I chose some funky patterned buttons to dress it with (and close it with). It's a blue button with a red flower. I also like how you can flip the hood back too. 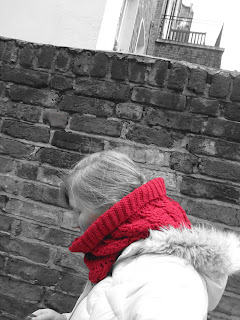 The hood was interesting to crochet. A fairly basic design. Just an oblong with some extra tabs and then hemmed all around. I liked doing the twisted crochet stitch. I'm impressed with how cabled it looks. I also got to do "rib" for the first time too. Though it's only rib in looks. It doesn't have the same stretch that knitted ribs have. 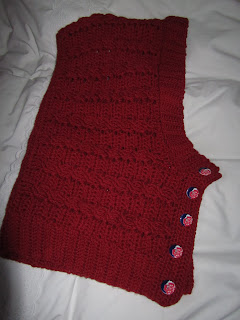 I do like the design and it's not too complicated. I'd pretty happily make another. But this time I'd wing it a little more and make it a better size. I also discoverd that when I wore it up as a hood when my hair was out, the twisting this way and that as I looked around inevitabley had whisps of hair being pushed forward and hanging in my face. Less annoying to wear it with my hair tied somehow. All the same it's cosy and I like that it when I was wearing my jacket it looked like I was also wearing a hooded cardigan or jumper. But I wasn't. Just a hood. He he. 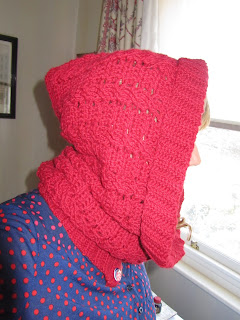 Lots of people drawing this week. While I don't really like drawing people because I find it difficult, I've either improved a bit or I've relaxed about the end result. I think it helps that I've begun experiencing different styles of drawing rather than trying to draw perfect detail. Some have just been an interesting experience--like drawing people in motion. This drawing is my choice of the week: Boys on fence in ink. 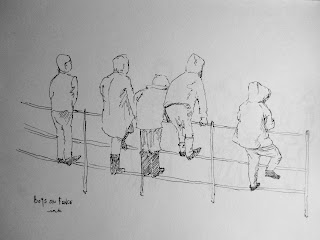 This task was to draw a group of spectators. I drew this early in the week on a day I knew I was to work a full day. I rose early so I could get my drawing done. I was very pleased with how it turned out. Taking care to match the size and preportions. Usually I don't particularly like drawing in ink either. It's so final and so fine but I must be getting the hang of it a bit. I tried not to worry about too much detail. In particular the colour of clothing. I like that I scribbled in their shoes/boots though. Adds a nice touch. Other than that it's just a tad of shading and enough detail to explain the shapes.

I'm also pleased that I got through another week (with the boy I care for being sick and grumpy meaning some longer days for me) and managed again to draw every day. Woohoo. That being said, I'm taking a week off. I'm spending the last half of this week on a holiday in Iceland--if London's snow doesn't distrupt my flight.
Posted by kelgell at 04:00 No comments: 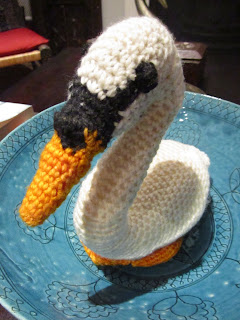 This sweet little white swan, which turned out not to be as little as intended, was hooked together and stuffed for my sweet little baby niece who arrived a couple of weeks ago. Another wing-it, I frogged and reworked the beak numerous times trying to get the size better and the black part right. I moved on hooking and stuffing as I went making it all up as I progressed. I had just finished the waddling feet which will be a fun feature for little fingers to grab when I heard little Elizabeth had finally arrived. I sewed on the last features, including embroidered black eyes and did a final photo shoot. 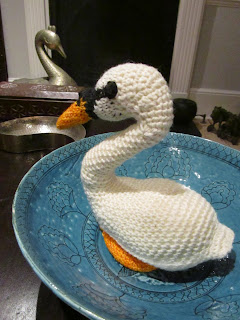 I didn't do wings like I had imagined mainly due to finishing off the cute little tail with just enough end to weave in. So this little white swan migrated south via royal mail. I chose to make a white swan because I'm here in the UK where plenty live and my darling little niece is home in Australia where our swans are black. It's a little symbol of this moment in time. Also I had the colours already stashed. Wish I could give her a cuddle with my real arms. She'll grow and develop so much before I get home. 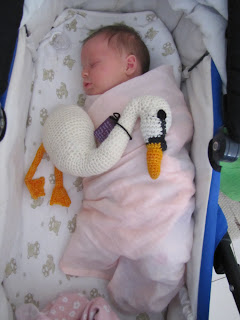 Give her lots of snuggles for me, young chap.
Posted by kelgell at 06:51 No comments: