In my room in London I have this lovely little writing desk to use. It's the kind of desk that makes me reluctant to sit my cuppa straight on the wood. Usually I rest it on some paper or whatever pile is there. But today I decided to tidy up a bit. While the boy was sleeping this afternoon, I decided to pull out some scrap yarn and make a pretty little cup rug. 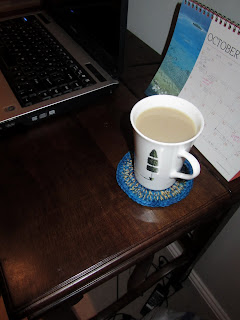 I love a spot of colour. I used the Bendigo Woollen Mills Luxury that I dyed blue and a little of what remained of the yellow and purple sock yarn. Using them both at the same time, I crocheted a simple circle. It still took a while as I find it difficult to make a flat circle. It keeps going wonky with too many stitches or not enough so there was a bit of frogging involved as per normal with my wing-its. When I'd made it the size I wanted, I dropped the sock yarn and did one more round of plain blue which wraps it up nicely. I really like how the stripey yarn blended with the plain. I ironed it to make it sit nice and flat and now I can rest my chai tea without any worries about the desk surface. 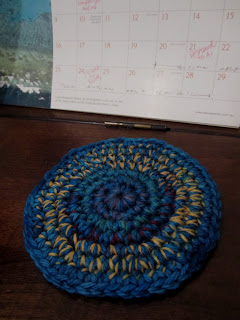 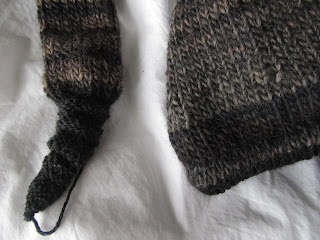 This rattlesnake beanie is a wing-it. (Meaning I got an idea and am making it up as I go.) It's knitted from left over wurm wool and mostly thick Lang West (roughly half wool half acrylic) in browny black. I've gotta weave in some ends and add some details yet but I'm eager to see the finished product. I think it will go down a hoot with my soon-to-be 8 year old nephew!
Posted by kelgell at 00:44 No comments:

If you're bored or if you want to procrastinate or if you feel like you want to simply wander around a craft market (without leaving your home) then check out the new link on the left.

The Universal Craft Blog Directory is an increasing list of various craft sites across the world wide web. Whether it's about knitting, sewing, papercraft, model making, doll making, cake decorating, crocheting, beading, jewellery making, cross stitch, woodwork, mosaic, pottery, or whatever else is out there and being done this is a place to gather.

If you're a crafter and have a blog to share, come and add it to the list. If you just want to look and see what others out there are creatively crafting, take a random wander through the links. I'm sure you'll find things that are new and interesting and amazing; even surprising and inspiring.

Just click the pic to begin.
Posted by kelgell at 05:58 No comments: 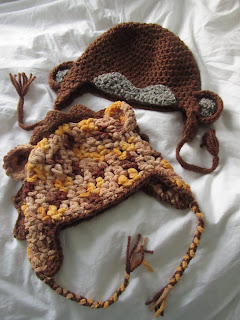 I've just finished crocheting two animal beanies. A lion and a monkey. They'll be ever so cute on the gorgeous twin boys I used to help care for. They turn one at the end of the month. 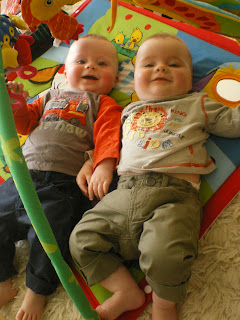 I made a rabbit beanie for their big sister back in June. While I no longer work for that family I thought I'd still go ahead and make the beanies I'd planned to make for them. It only seems fair. Besides, it's their first birthday so it's a little bit special. 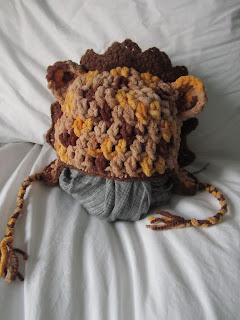 The lion beanie I made from a chunky soft acrylic along with some plain brown mostly or all acrylic (I can't remember). I made two lines of triangles for the mane. One is long and goes from earflap to earflap and the other is shorter just going from ear to ear. I was going to put one in front of the ears but when I looked up pictures of lions, I discovered that most of their mane is behind their ears. 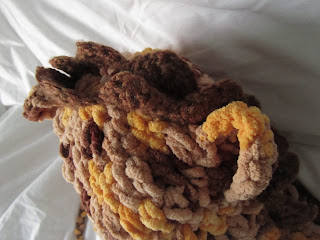 The monkey I made from the same brown and it took me quite a while to get the head going. Lots of frogging and re-crocheting as per normal when I'm winging it. I eventually got it to work and decided on grey for the inner ear and top of the face. I'm quite happy with how they both have turned out. 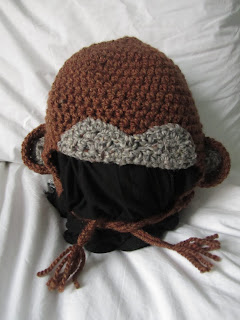 The only issue is that I think I made the monkey one too big. See...it fits MY head! It's always a challenge to make things like this, not using a pattern, when you can't try it on as you go. I hope it's not too bad of a fit but better too big (it can be grown into) than too small. 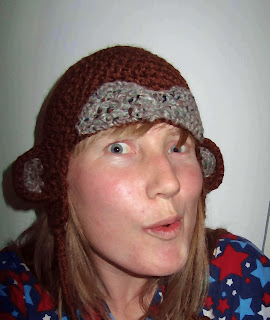 Oh well. I'll post them on anyway and wish them a wonderful birthday. Little cuties. :)

My next projects are more beanies. Knitted ones this time. One is my wurm replacement and the other I've just started is a special one for a nephew of mine whose birthday is coming up next month. I think he'll get a kick out of it.
Posted by kelgell at 04:14 2 comments:

a bit here and there

I haven't been blogging much for a while, I know. But I HAVE still been knitting/crocheting in between everything else that's been going on. Aside from the limited internet access, I've been on a road trip around Ireland for a week while I was waiting for my new job to start. When I got back I had to pack and move to London and start settling into my new job. All this has kept me pretty busy. Oh, I also got sucked in to listening to The Host by Stephanie Meyer on my ipod. Very interesting story.

So before I went to Ireland I bought myself an ipod. A lovely yellow one with 16gb so with all my music and the shows and audiobook I bought from the iTunes store there's still plenty of room. I decided to knit a case for it so it wouldn't get scratched and ruined when I threw it in my bag. Using left over sock yarn from the last socks I made, the first one I knit ended up being too tight to squeeze my earphones in as well. The way I stitched the top looked terrible too. So I started again. This time using doubled yarn so the stripes became a speckle of colour and using 4mm needles so it would knit up quicker. The idea was good but I had intended to make it even looser than it turned out but it fit my ipod and headphones. I didn't have time to try again. The lid is attached so it's a flip-top; even if it is a bit of tight fit. I also purled an 'i' on the back of it. ^^ It's a snug little sleeping bag for it.

My other knitting has been the continuance of the spiral cowl I've been working on. I started it about a month and a half ago a bit before I went to Scotland. I cast off and wove the ends in the other night and today gave it an iron blocking so it would sit flat and show off the spiral pattern. I noticed a few mistakes when I did this. Not that they're that noticeable to anyone else. 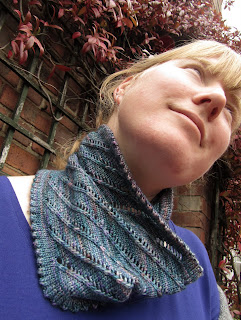 I just realised I've not showed you this project at all. I used the Malabrigo in Atardecer that I bought in Ireland back in May when I went for the weekend. I only used one skein and a little bit more. I used the Spiral Cowl pattern by Keri McKiernan. Free raverly one of course. 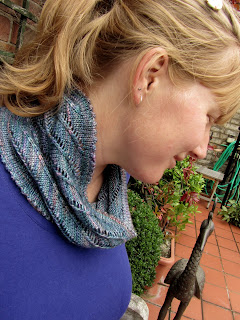 I'm actually a little disappointed at how this turned out. It's a lot bigger and floppier than I'd hoped and doesn't quite sit like I want it to. Perhaps the yarn I used isn't stiff enough. 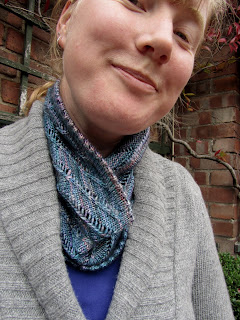 It works ok like this and I can use my thistle pin I got in Scotland to hold it like that. But I'm thinking I may attempt to felt it a little. Perhaps on one side--the back. Hm, might look into it anyway.

Now that my 4mm circulars are finished with the spiral cowl I've put them to work making my replacement wurm. This time I won't wash it in the washing machine.

I've also been working on some animal beanies for the twins I previously cared for. They turn one at the end of the month. I made a rabbit beanie for their sister and decided I should still give them the beanies I planned to make for their 1st birthday despite the fact that I have a new job now. I'm near finished a lion beanie and have just started a monkey one as well.

I also attempted to find some craft shops today that the mum here had been told about by a friend. She couldn't quite remember where they were so we guessed a bit. It was a bit of an adventure to find the place...catching a bus that didn't go to the stop I had wanted and then ending up somewhere off my map and figuring out from maps at the bus stops where I was and where to head etc. I did find the area we thought her friend had said but I didn't find a single craft shop. I did a huge walking loop and ended up back home without anything. Might do a bit more research online before I head out on that mission again.

In the meantime, I'll see if I can get these beanies finished and free up some more needles again. I have more ideas waiting. ;)
Posted by kelgell at 04:15 1 comment: