My major craft projects this year are two quilts.  One is finished and I'm very happy with it.  The second is coming along nicely.  Unfortunately for you, they're Christmas presents so I can't show you yet.  I have been working on a few little toys though.

My current job is caring for an 8mth old boy who's just got the hang of sitting up without toppling often meaning playing has become a lot more fun.  Whenever I changed him he kept grabbing the bag of cotton balls.  I kept my eye on him to make sure he wasn't going to put the bag over his face or in his mouth but he preferred to play with the little strings you use to pull it closed.  That's where this idea came from.  Babies seem to find the tags on anything you give them to play with.  I'm not sure what the thrill is myself but they seem to be quite popular.

I made a little wheat bag to give this toy some interesting movement/sound/weight when you hold it and then made a cover for it.  That makes it washable when it gets dirty, snotty and slobbered all over.  The tags were a bit frustrating to put together.  Or rather my putting them together was a bit frustrating.  I'd pinned them all on when I realised I was pinning them the wrong way (sticking out meaning when I turned it inside out they'd be on the inside).  Lucky, I thought as I reversed them and then got to sewing.  But I obviously hadn't thought it through that thoroughly.  AFTER I'd sewn it, I realised that I'd still placed them in the wrong spot meaning they'd still end up on the inside.  There was no way around it.  I had to unpick and start again.  I ended up getting there a little more roughly than I'd intended.  A simple little something for textural interest and that baby thrill of tags and strings.  The only thing I'd do differently next time is not put one long strip of velcro to hold the cover shut.  It interferes with the flimsy movement of the wheatbag. 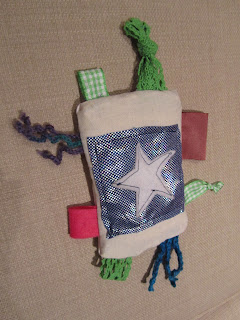 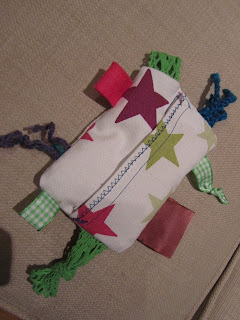 Toy number two which I've just finished is another simple one which I've made for a new baby.  Just two simple rings crocheted, one joined together through the other.  With the coloured ring I crocheted a bit of tube and then closed if off by decreasing to form a circle.  Then I picked up stitches back at the tube width and continued with tube.  I fit three small bells inside before I repeated the circle closure creating a little containment area for the bells.  I've added bells to toys before for that rattle aspect but find the stuffing mutes the sound.  Creating this little compartment means the bells have a bit more room to move to give it a nice soft rattle.  I then stitched a little flap of contrasting fabric around where I'd joined the ends together after stuffing.  Partly to make it look a bit neater but partly to add that extra tag fun. 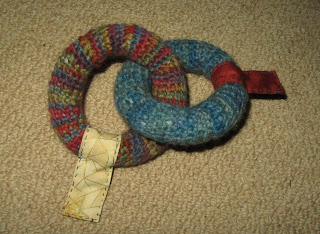 Remember this?  It's the Through the Woods hood that I crocheted early this year.  In the post linked to the pattern name I commented that I like the pattern and design but complained about the end result being too large.  I'd used Berroco Ultra Alpaca which was probably too soft of a yarn to hold much shape.  It's been mostly not used due to the disappointment.  I'd considered altering it but the only way to do that would be to completely undo it and start again. 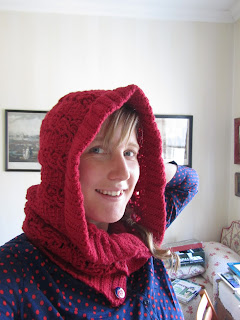 I saw it again in my drawer last week and pondered again what I could do to salvage it.  Then another idea came to me.  Washing can shrink things.  Well, I decided I would never grow satisfaction for the hood as it was so I tossed it in the washing machine by itself to see how it came out. 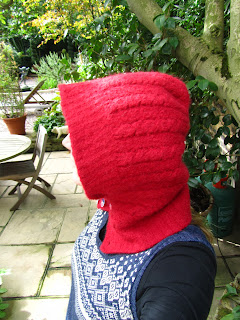 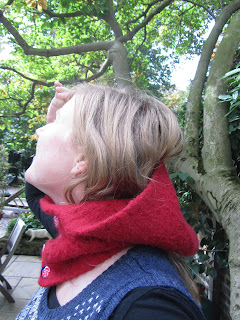 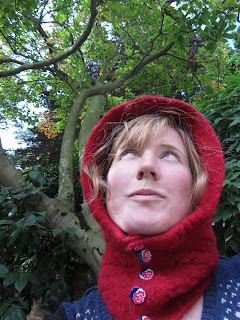 So, still not sure that I'm happy with it.  On the positive side, the tangled fibres let less wind through so yay for the warmth factor.  I stretched it out as much as I could with a big bowl under the hood part and pinned it down to dry.  It's really stiff though which is not so great especially in the neck area where it needs some flex.  It doesn't quite sit as well as I'd like and it's also a bit smaller than I was hoping for.  Anyone know of a way to soften felted products?

Oh well, what can one do?  Experimentation always comes with a risk.  Not sure if this one improved it or not though. He he.  New knowledge gained though.