Isn't that part of my job as a nanny? Ok, so these ones are literal. 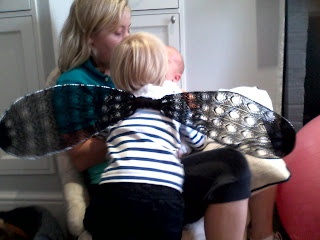 Just the classic reshapped coathangers twisted together and covered with a pair of stocking and a couple of elastic loops to slip his arms in.

It was a bit of a spur of the moment. Or rather a spur of the afternoon. He actually gets excited when I suggest going to the fabric shop. ^^ He got some swimming badges from his swimming classes so I'm going to make him a swimming flag to put them on. You know the red and yellow ones at the beach? Swim between the flags? One of those. He can hang it in his room and add more badges to it as he earns them. We had somehow got onto the topic of wings and he asked me for some. Or perhaps I mentioned making some for him which he then repeatedly asked for. I had some funky stockings I had hoped to wear to a 1920s party a while back. But the "large" sizing was NOT a large pair of stockings. So wings they became.

I've also been sewing away on a "kelly-made". I make a quilt for all my nieces and nephews for their first Christmas and my older brother's kids all call them their "kelly-made's". Sweet. He had another gorgeous daughter this year so I've been designing and stitching together another quilt. It's finished. Not so girly as I'd intended on making it since I knew she was a niece but I think it's awesome anyway. Not without it's unique handmade trademarks. ;) I love how the design came out though. But I can't show you yet. All will be revealed after Christmas. I've another quilt to make yet for my younger brother's first tiny offspring due next month. But first I've some more urgent projects. My job with this family finishes up next month :( so I'm in the process of making some parting gifts. I'll be able to show you some soon I hope.
Posted by kelgell at 06:33 1 comment: