knitting and knights (and little red)

This is the knitting part anyway. The knights part is on my other blog.

So after realising this week that Knit Nation was on in London this weekend I made some quick arrangements to go check out the marketplace on Saturday. I arrived about 10:30ish and hung out until 2pm. I first wandered around the marketplace just checking out what was there so my second time around and my going back and forth between stalls could be for deciding what to buy. I didn't save up for this one like I do for the one in Australia so I had a limited spending range--which I busted anyway. 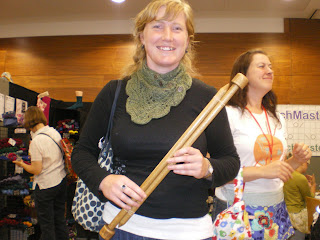 Check out these babies! Hugest one's I've seen so far. Photo worthy. Have no idea what the actual size is though. I'm glad London provided a lovely summer's day for wearing something knitty. He he. I got to christen my new umbrella too. I had a number of comments on my leafy neck wrap which is always nice. 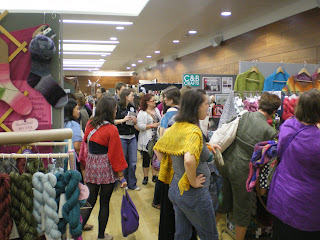 Here's a general shot of the Marketplace room. This half of it though I'm not quite standing at the end. It was delightful to look around and touch and think about buying but the size did let me down a little. If you've ever been to the Bendigo Sheep and Wool Show you'll understand why. Mostly at Knit Nation Marketplace it's just skeins (which seem to major on fingering/4ply yarn) with a few little knick knacks like stitch markers and needles and bags. They had a little fibre and books and patterns as well. Sorry, but nothing like Bendigo dishes up. I think Knit Nation is more about the classes you can take which run all weekend. 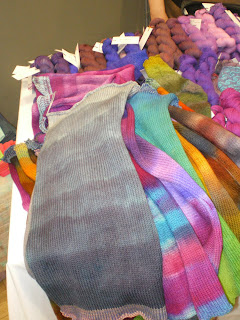 I discovered the existance of sock blanks. That is when plain yarn is knitted into an oblong and THEN dyed. You then knit straight from the sock blank as you unpull it. This one is double knitted (two threads knitted at the same time) so you can knit two socks and have them look the same. You can get some interesting results.

I went ahead and bought some stuff and then got too hungry not to snack on something. So I pulled out my gingerbread I brought with me as I headed up stairs to the Knit Tea Salon. Yes, I had to get the sheep one to take to Knit Nation. :) 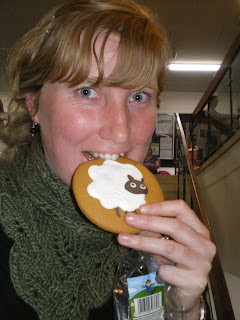 By far the highlight of the day was meeting Ysolda Teague who writes some awesome knitting patterns. She has a great style. She has fabulous patterns and I'm impressed with her talent and knowledge. I got to have a squiz at her new book and decided in no time at all that I must buy it. I did first have a go at the lucky dip--just in case I scored the book for free--but I got a voucher for an online pattern instead. 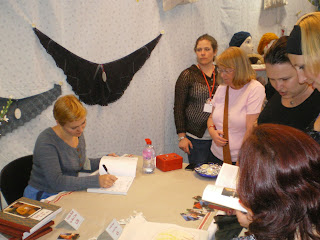 I also met her friend, Sarah, who I recognised from Ysolda's blog. Sarah sometimes posts there too. From what the book says, she sounds like a great friend. I talked quite a bit with her and she helped me try on some of the garments that were there (from Ysolda's new book). She really was a lovely woman. 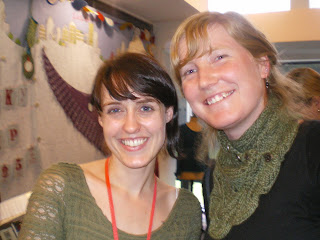 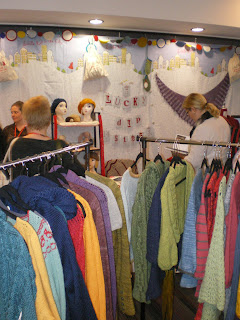 I had planned to get a photo with her but Ysolda actually had a photo booth there. So I doned one of her designs (the one I want to knit) and had a photo with her. When it printed out I was seriously disappointed. My eyes were closed! :( It just wouldn't do. So I put on another item (the same one in a different size and colour) and she happily obliged me. Thanks Ysolda! So I bought her book and a project bag (coz I'll need a bigger one than I have for knitting a sweater) and she signed both. I'm a little embarressed to say I acted like such a fan. I was so caught up in the thrill of it all that I later thought, "I should have spoken to her more. Even just said that I liked her style and her designs are great." Silly me. I did thank her for signing my purchases and being in my photo at least. 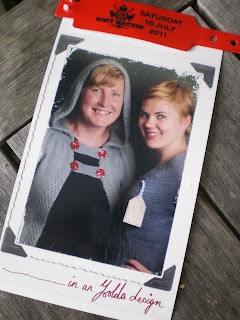 So here's what I exchanged my pounds for:

I bought two skeins of Knit by Numbers 100% Merino DK in dark charcoal from Fibre Harvest so I can make my wurm beanie that I've had in my Ravelry queue for a while now. I also bought a skein of undyed 4ply which is 90% British Wool Superwash and 10% Nylon also from Fibre Harvest. This 100g skein was a show special for £2.50. I bought the "Little Red in the City" pattern book and project bag from Ysolda as I mentioned and then went back to the Marketplace to get some needles with the last of my cash. I bought two Addi 100cm/4mm lace points. These ones are metal so that will be a first to try. And it also means I can start on my wurm before I finish my pixie beanie. ;) 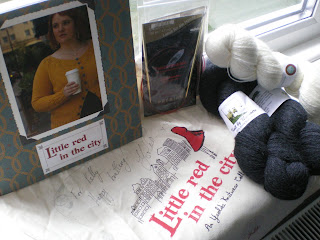 Ysolda's book, Little Red in the City, is soooo good. I'd been umming and ahhing about buying it until I saw it at Knit Nation. It's bigger and thicker than I was expecting and has loads more interesting and useful information than I'd heard too. It was great having a range of garments from the book on display too as I realised that there might just be more than one I want to make. The lay out is fabulous too. I love the style. 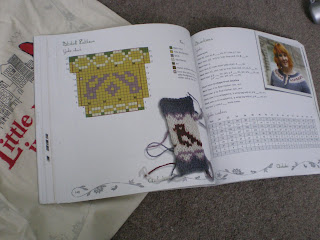 The fantastic feature of this book is the range of sizes for each sweater. Thirteen of them! Each pattern is photographed in a smaller size and a larger size too which is a real bonus. The patterns have a fill-in-the-gap feature as well meaning you take note of the size you are knitting and use the chart to find the corresponding number for the gap you are filling. 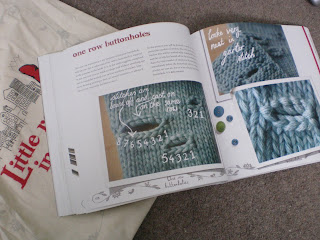 It has lots of useful tips and techniques like this 'one row buttonholes' section and others like different ways to do shortrows and blocking. It gives lots of information on how to get the right fit for you including how to measure the body it's going on and how the adaption to the sizing works. It also shares the value and importance of swatching and considering ease. It was also nice to find a little bonus ruler gage tucked in the book. Oh I look forward to reading this book more thoroughly and indulging myself in getting Melia and maybe more on my needles. Well worth the buy. And of course the lovely bonus of them being signed in person by the author makes these two Little Red's in the City my new treasures. ^^ 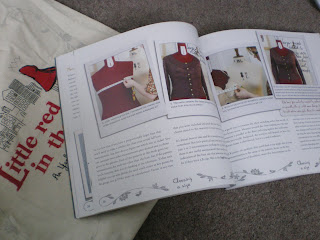 Overall the Knit Nation part of my day was wonderfully pleasant and I quite enjoyed myself. I'm glad to say I've been though I suspect if you're interesting in gaining knitty knowledge and not just there for the shop, attending the classes would make it way better. But I still must say, if you've never been and if you are ever in Australia in July, you MUST go to the Bendigo Sheep and Wool Show because by 2pm at Knit Nation Marketplace I was ready for something else--and my bus didn't leave till 7pm. That's where the knights came in...
Posted by kelgell at 22:13