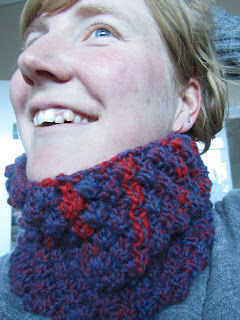 A cowl worked with bramble stitch.  Just your basic rectangle with ends sewn together.  At least that was the idea.  I decided to knit this out of Moda Vera Audrey in 3901 Rainbow which was actually half knit into a plain scarf. I frogged that obviously.  I used 6mm needles to stretch the yarn out as I only had two balls of it.  However, once I'd finished my rectangle, I decided it was too floppy as I wanted it to stand up more around the neck.  So I started a new rectangle with garter stitch to make a liner. 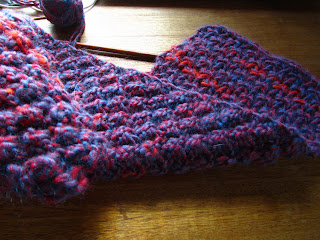 Half way along I realised my guessed width wasn't matching but I decided to knit the right length and then pull out my crochet hook.  I crocheted some extra around the edges and then sewed the two pieces together, joined them in the loop and did a few stitches in the middle section so it wouldn't gap and bubble.  Very cosy and warm though a little more 'turtle neck' than intended.  This one's a surprise gift. 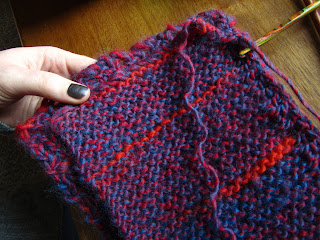 How sweet are these!! 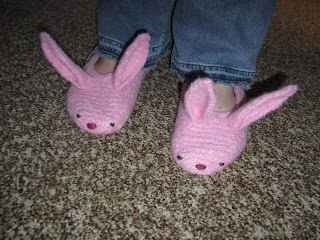 I crafted these from Tiny Owl Knit's Hopsalot pattern using Moda Vera Pure Wool extra twist.  I had showed a picture to my friend for her birthday and said, "This is your present.  You choose a colour and I'll make them for you."  She chose pink to match her pjs.  I'm not a fan of pink but they still look cute.  This was my first attempt at knitting and purposely felting.  I looked for yarn that required hand washing and was 10ply as the pattern suggested. I knit double following the pattern.  (And I really did follow the pattern!!) It was a reasonably quick knit using doubled 10ply and 8mm needles. Once all the knitting was done and I'd sewn the slipper together to form the 'shoe' shape, I put on a movie and got scrubbing. 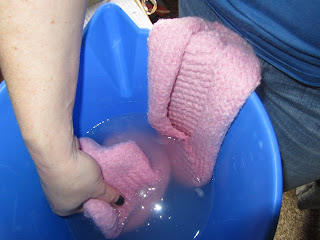 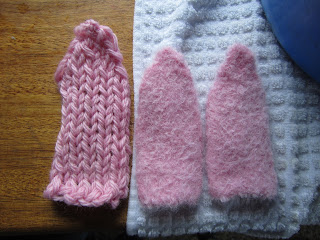 Warm water and a bit of soap and whole lot of elbow grease.  Takes a bit to felt by hand and scrub away at the knitted fabric for quite a while before fibres start to loosen and matt together.  But they do.  As they matt they shrink so the felted product is always smaller meaning the knitted version has to be oversized.  My friend arrived, as planned, just as I'd almost finished the felting process and I fitted them to her feet.  Once the ears were felted as well and all the shaped pieces were dry I was able to do the finishing touches.  I sewed the ears on and sewed some eyes and nose.  I made two little pom poms using the fork method.  My pom pom making skills must need some work coz I found it quite difficult to get a good pom pom happening.  Sufficient ones for bunny tails still so...good enough.  I found though that the slippers would slip off my heels too easily so I also stitched some elastic on the inside around that area so they pull into and hug the heel. 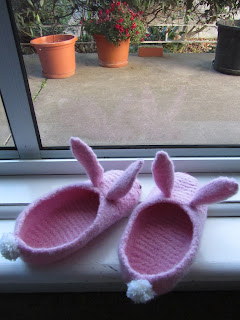 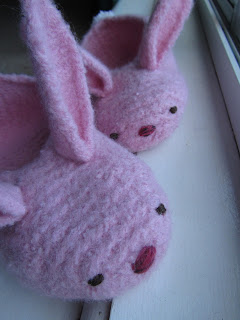 Overall I'm rather happy with these cute little buns.  I think I'll make myself a pair, though I plan to alter the pattern a little and make sheep instead.  And not pink.  Maybe I should do green.  ;)