I have a rainbow project in mind and wanted to use Bendigo Woollen Mills Luxury. Warm and soft. But I didn't need 200gms of the colours I wanted so my sister suggested I get white and dye it myself. So that's what I did. 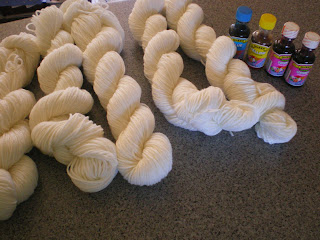 I bought three balls of Frost and split them into six skeins and then got cooking. 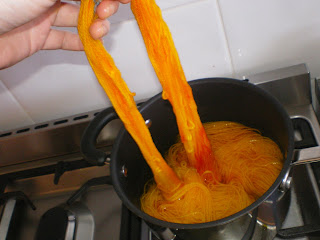 The first lot I soaked in a vinegar water mix for half an hour and then dropped in some yellow food colouring. Only, since I had it soaking already the colour disappeared from the water before I could mix it properly. So I added some cochlea food colouring to go with orange. 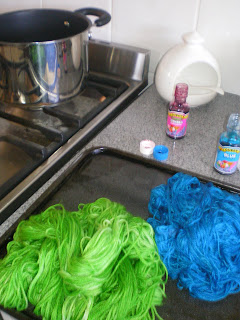 And did some more colours. This time lifting the yarn out of the water, putting the dye in the water and then the yarn back in. It dyed more evenly though most colours have a few shades. The green has some speckles of white but I kinda like it. 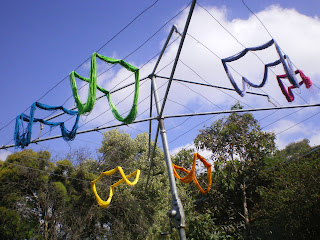 The day was nice so I hung my work out to dry. It took a bit longer than I thought and I was almost late to my nephew, Zachary's, first birthday party. I was mostly happy except, even though using 1.5 bottles of cochlea food dye, I still got pink. Thanks to my sister, again, I realised pillar box red is what I was after. I knew I didn't want rose pink but did you know not all supermarkets stock pillar box red? Yeah, didn't want pink so back to the stove. 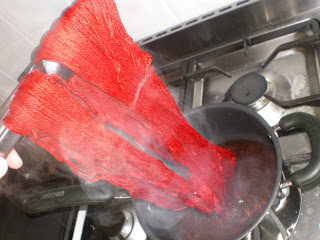 Cochlea overdyed with pillar box red. I dyed it once but it had a bit too much pink showing through so I went back for another round. Ha. I was too rushed this time. I didn't soak it long and probably didn't cook it long enough either. Ding. Ding. Round three. 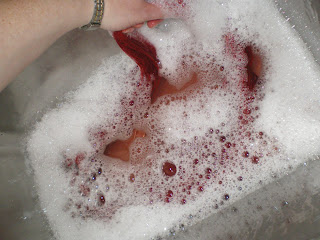 You usually get a bit of dye in the wash. This pic isn't so bad. The one before it was really red. 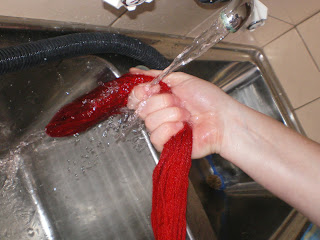 After a wash it needs a good rinse. It seemed to take ages for the water to finally run clear. But when it was done and dry... Oo oo. ^^ Rainbow Luxury!!! Oh, hand-balled yarn is so lovely and round. Watched a few movies getting it that way too. 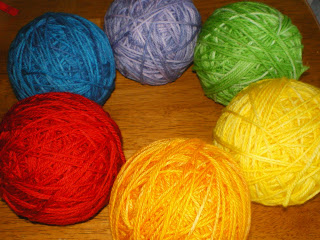 Now I just have to wait for my black on back order so I can begin.
Posted by kelgell at 18:33