Here I mentioned starting a project for a special someone. Well, it's finished and been given. I visited one of my best friends this week and this little guy was for her newest little girl born last month. 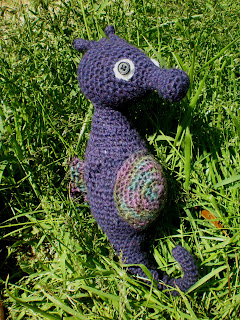 Designed as I crocheted I had a bit of challenge getting the shape I wanted. I even cut his neck off and unpulled some and re-crocheted it shorter and wider. I did that because his neck was a bit floppy so I changed the shape a bit and packed it tighter with stuffing. I also did a cute little tummy patch so it would stick out. I then did this cool wavy fin thing from his head right down his back. I was about to do some little fins for arms when I decided I'd google 'seahorse' and see what they actually looked like to get the fins right. Only, I discovered they don't really have fins....or big wavy bits down their backs. Oops. So I changed it again to be a better representation. I cut off the wavy bit and crocheted some little ... umm... nobly bits for his head and gave hime a nice little dorsal fin. 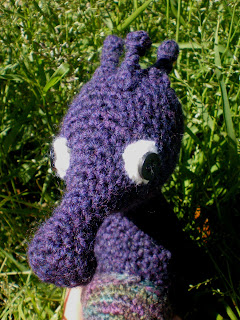 Here's his cute little head. I went with little black buttons for his pupils. With his tail, I just crocheted a straight tube that got wider and turned into his body. Then, after stuffing it, I just twirled the tail lots pulling it into shape. It's not as spiral-like as I was intending. I was even thinking of stitching it in place so it would stay but I decided it looked better like this. It should be flexible coz they use their tails to hold onto seaweed and stuff. 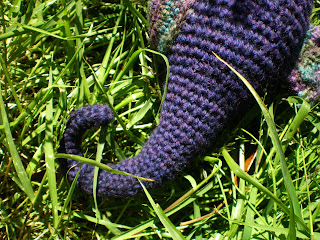 Okay, so Tiny isn't really into toys yet but it still makes a cute picture. The day will come when she finds the seahorse interesting and wants to play and then he will be lovingly sucked on and stretched and tossed around. Ü 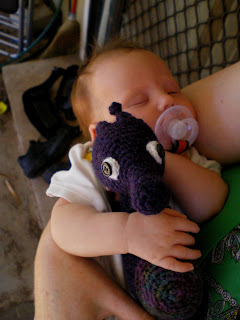 It's done! I finally got around to blocking the edging. I needed to stretch it out as much as possible. With it blocked I could get around to sewing it to the main part. I needed to squish the stitching at the button end so it would reach right to the end. I also decided to crochet along the top just to give it an edge and squish the to button end there too so it was a nice rectangle shape. Then I ironed it flat. A bit of trying and retrying with the buttons. Nice ones I had. Fake metal with a swirly pattern that suit this project well. The photo here has only three but I ended up going with four coz it sits better when done up. I do it up along the long top edge where the leaf edge begins and it looks like the edging goes all the way around. 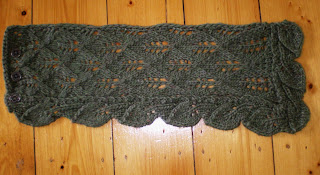 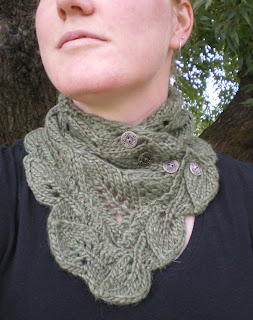 I like it. ^^ I like the leafy pattern. It was a fairly simple pattern to knit. I just had to keep track of where I was up to and pay attention. It knit up fairly quick using Patons Wilderness in the green colouring whatever it's called. It's 10ply or so and I used 8mm needles. Oh, I just used a stitch pattern from my Knitting & Crochet Bible and an edging from there too. It's pretty basic. A fancy kind of casual to wear though.
Posted by kelgell at 10:03 2 comments:

Here's my travel friendly needle/hook wrap. I finished it by the weekend as predicted. It has pockets at both ends so I can buy lots more. Or perhaps home all my current ones when the projects are complete. I stitched it with two colours--brown and blue. As I was stitching the pockets on the second end I realised I was going to run out of blue. So I picked and chose which lines I was going to sew and which ones I'd skip and went until the thread ran out. Instead of having the same pockets on both sides, one has some larger pockets which actually worked out well. When I did my rough measurements I used my knitpro crochet hooks. I didn't realise that the metal double pointed needles were bigger. Bit of a d'oh. But if I slant them over in the biggest pocket, they fit. Yay. 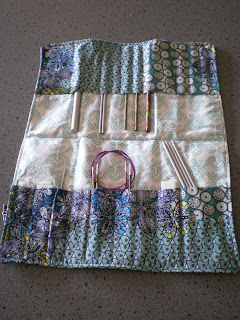 Then to close it you fold it in half which stops all the hooks and needles falling out. 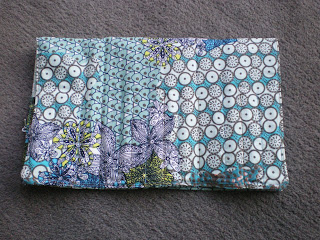 I designed it to then fold in uneven thirds so it's flat meaning that I can store my circular needles in here too. 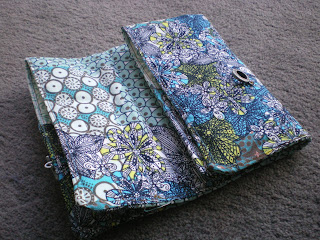 It makes a niftly little carry case that is a great size for travelling with. Perfect to tuck away in my luggage when I head off to the UK. And since I was making a trip to Melbourne to visit some friends I decided to go a bit earlier and visit Morris & Sons and add two 2.75mm circulars and a 3mm hook to my collection. 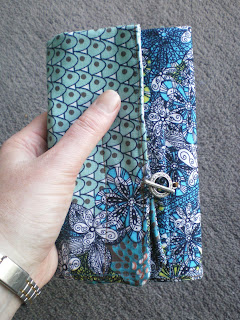 Oh yeah, found some nice metal necklace clasps and decided to add one to this to hold it closed. Different and interesting and a little bit fancy. I'm very happy with this.