It's an exciting week here where I work. (I'm a live-in nanny in England at the moment.) This week the 3yo boy I care for became a big brother! Just before the weekend I decided to look through ravelry to see if I could find a nice quick knit present I could whip up to welcome the coming little one. You know the kind--small, cute and 10ply/worsted yarn ;) Well I came across this fabulous pattern that I was immediately sold on. These little whales are designed by Cheezombie. You can check out her other patterns in her etsy store too. However....cheapo me didn't buy the pattern. I just looked at the picture and decided to wing it--still giving credit to Cheezombie's design. Once I got to the tail I got stumped as to how to do the little dip in the middle and emailed my sister for ideas. She emailed me back the pattern as an early birthday present. He he. In the meantime, I'd finished it off still winging it. 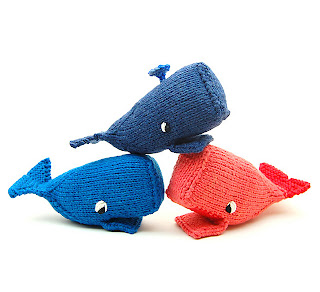 Cheezombie used cotton for her whales I think which gives a great shape. I used what I had which was Malabrigo worsted in azul bolita. Pure merino wool which is so soft but not so shapely. I glanced over the pattern and realised I had knitted it quite differently. Forgive me cheezombie, but your pattern seems a bit more fiddly in theory with stops and starts and sewing pieces together. Mine was fiddly too but from trial and error.

I started at the opposite end than the pattern does and knit the whale in one piece. I first knit a square of 12x12 stitches and then picked up the stitches all around the square increasing one on each corner (giving me 12 stitches for each side). Then I just knit round and round. About 18 rounds. On the underside I knit and purled back and forth about 9 rows and then as I continued k&p-ing I folded it over and knit front and back together at the edges forming the mouth flap. This was a pretty tricky bit and I'm sure I could find a better way to do it that would end up neater. Once I was back to where I started the mouth I got back knitting rounds. Here I can't tell you what I ended up doing as I frogged and knitted rows too numerously to remember exactly what is now there. Basically I decreased down to 18 stitches. I then stuffed it, a little more than I intended, and with 9 stitches on two needles I knit them together to close the hole. Then I increased on each end as I k&p-ed the tail. I ended up just knitting it straight and then as I weaved in the tail of the yarn I did a gathering stitch down the middle of the tail. I like this tail shape more than the pattern anyway. Finally, I sewed on some felt eyes and wah-la!! 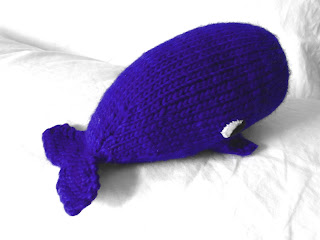