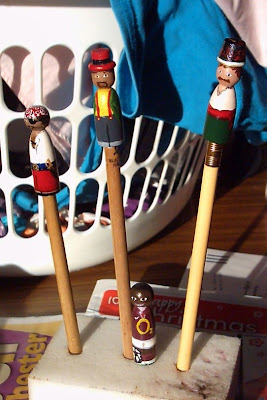 I love these guys! Just a simple wooden shape cut to fit on the end of a pencil. It was my painting that really brought them to life. Each one is such a wonderful character. I still think the pirate is my favourite. However, they were all given away as presents.

They're all just random characters I pulled from my imagination except the one standing at the bottom. He's representing Thierry Henry and went to a friend who is an Arsenal fan. Henry was his favourite player.

These guys were fun to paint and add some life to your pencil. I'll have to see if they still sell the little wooden men...
Posted by kelgell at 16:53 No comments:

The reason for my silence... A simple idea that turned into quite a large project. (Not uncommon!) Since my money is tight at present I decided to crochet my niece a poncho for her birthday. I started about 3rd March making little squares of flowers using a popcorn stitch. However they took a lot longer to make than I thought they would. Simple, just time consuming. So I changed the pattern I had and made it up as I went. I still only finished it this morning. 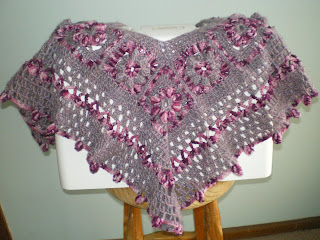 I decided to make enough squares to go around the shoulders and then stitched them together making a little fence between each popcorn flower. Then I added some double crochet stitches to make a simple neckline before moving on to the main part. 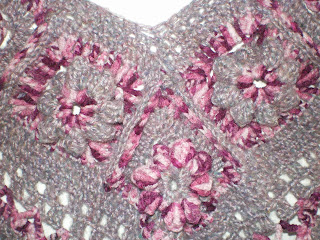 I just guessed and tried and decided what worked. Part way down I decided to add some interest and brought back in the pink and tried out a festoon stitch. As I continued I began to worry I may not have enough yarn. I managed a decent length before the greyish purple ran out with about 15cm to spare. So I set to work on making an edge with the pink with a bit of popcorn detail. But I soon discovered, after an evening of crochet, that there wasn't enough to get around. My housemate and her boyfriend tried to convince me not to unpull it and re-do it but rather try and find some matching yarn. Try as they did they could not persuade me. The pink yarn I bought in Adelaide some 7hrs drive away and also some 3 years ago. The greyish purple was opshop scraps. I discovered a little extra of the pink yarn in my stash but even with that it wasn't enough. So yesterday I unpulled it and spread the popcorns out more and got right around the bottom. 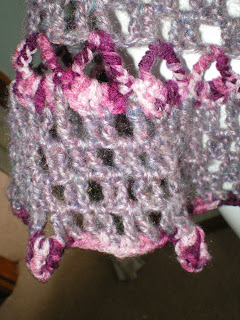 Today I tidied up the wild ends of yarn and neatened it all up. As I crocheted from the square of popcorn flowers, and as I wasn't following a pattern, I did more stitches than needed to keep it a flat square. And especially after the festoon stitch it had a real wave in it. But I think it looks lovely with the wave. A little more special. I hope my now 9 year old niece loves it when I get the chance to see her and give it to her. 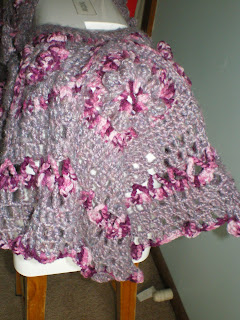 I like the way it looks and the way it falls. But it certainly took a bit longer than expected.
Posted by kelgell at 10:34 2 comments:

It's been an exciting day!! Today is a landmark for me. Today I opened my own little store to make my creations available to the world.

Last week I visited Kyoko's blog and she was raving about ArtFire.com as a great place to sell handmade goods, supplies and antiques. If you're into or interested in selling this sort of stuff, check out her rave about it. (Only, if you decide to join make 'kelgellcreations' the one who referred you!) So after brewing for days I finally decided last night I would open my own shop. So today I've been gathering the final details I needed to start it up and I am now open for business. There's only a few items at present but there is definitely more to come. Go ahead and check it out!!

Well it was one of those annoying nights last night. Tired and sleepy at 10pm so I went to bed. Two and half hours later I was still lying there waiting to fall asleep. Grr. By 1am I decided since I was awake I may as well make use of the time so I got up and settled at my desk. I'm gonna be a bridesmaid for my friend's wedding but my dress, which previously had silver clips, needed some black ones instead. So I'd bought some hairclips to decorate in black attire to be suitable for the occasion. 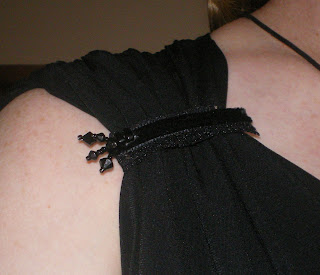 I quite like how they turned out. I wired a bunch of black beads together somewhat randomly and then sewed those onto a strip of velvet ribbon. I then glued it onto some black lace and onto the clip, sewing the ends to the clip to make sure they stay there. It took me two hours to design and make them so I didn't get back to bed until 3am. Thankfully I had nothing I needed to get up early for today.
Posted by kelgell at 17:34 No comments: