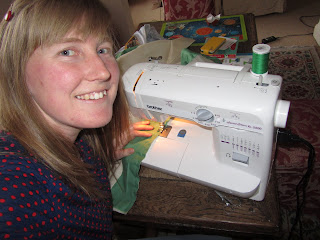 I didn't pack my sewing machine when I moved to the UK last year for obvious reasons. But it turns out I'm becoming an aunty two more times over while I'm away. One in fact has already started her life in the world. The other is due later this year. It is my aunty tradition to make each of my neices and nephews a quilt for their first Christmas. So I simply had to get a sewing machine.

I've been looking on and off for quite a while trying to find a decent second hand one that did the things I wanted it to; namely stitch width and length adjustment. If I did find one I was happy with I would call to discover it'd been sold already. Well, I finally managed to win a decent one before I went on my last holiday and asked the seller to delay posting it so it would arrive once I was home again. It arrived last week. Last weekend I went fabric hunting. I crave the craft stores of Australia! Even the USA. In England it's hard to find what I'm looking for. Half the time I just buy online if I can because it's easier.

It's practically as good as new. It did take a bit to get the tension right but I suspect it may have to do with the cheap thread I was using at first. I have found there's been evidence toward that end before. Now that I've got the good thread for the quilt on it's been running nicely. Bit noisier than my Aussie one and not as smooth but works well and will suffice for the year. Then I'll ditch the british for my beloved Aussie bro. ;)
Posted by kelgell at 08:27 No comments: