Damn it! I didn't think when I did my washing yesterday. :( My wurm. My newly finished wurm. It needed a wash coz it got all peat smoked when I visited an iron age house in Scotland. And I simply didn't think when I put it in the wash with the rest of my stuff. 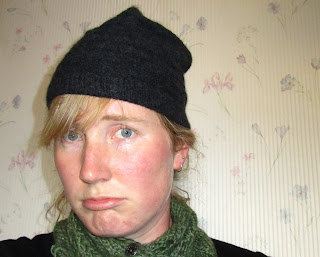 Resulted in my first felted knit project. One shrunken, felted wurm beanie. No longer fits. Nor has the same texture. Bummer. Oh well. Nothing can be done now. Perhaps it was a good thing that the pattern called for more yarn than I needed making me buy two skiens. I think I shall be making another with that spare skein.
Posted by kelgell at 03:10 1 comment: 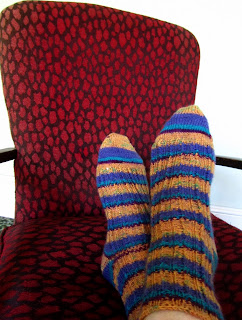 I finished these socks and sewed in the ends the night before I left for Scotland. I wanted to take them and they were so close to being finished. ^^ They were knitted with Moda Vera Noir that was given to me for my 30th last year. I picked a cable pattern out of my Knit and Crochet Bible to use on them with the hope they might slurr the stripes a bit but it didn't work. They just look stripey both ways. It's a very simple cable. If you can even really call it a cable. 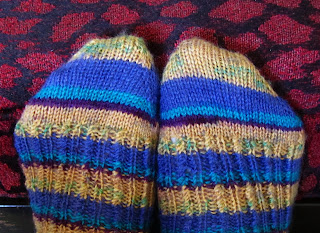 I doubt both socks are exactly the same. Well, I know they are not. I didn't follow a pattern and then had to guess to get the second sock similar. He he. The 'cabling' is over the top of the foot and then right around the ankle with a basic rib at the cuff. I did short row heels as that's all I know how to do. For the second I tried a version from Little Red in the City as I mentioned in this post. It's the one on the right. I like what I did on the first sock better. Less holey looking. I don't know what it was I did though. Ha ha. But that's what you get for not following a pattern and not keeping a record of what you do. I don't mind though. They kept my toes warm in Scotland. ^^ 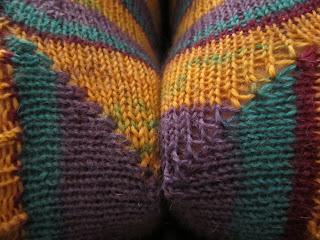