My sewing machine has been getting a good work out lately.  I love having it there so I can just pull out fabric and whip something up when the desire inspires.  These first two objects were planned.  The fabric I saw and had to get.  The boy I was looking after at the time just loves helicopters and planes.  In the end, months after I got my hands on the fabric I was invited to his and his friend's 4th birthday party.  (His friend I also looked after on a regular basis and also loves helicopters and planes.) 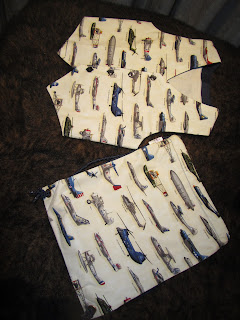 I made the waistcoat for the boy I was working with (previous nanny job) from the pattern Burda 9990.  I had some challenge translating the pattern into product.  I don't have much practise in this area of expertise.  At one point I got really stuck and ended up emailing some pics to my friend, Tab, who's done much more sewing than I and asking her.  Thankfully I got it all sorted and was able to progress.  Pretty happy with the result.  Had some errors to correct after attempting the button holes.  (First button holes on my UK sewing machine.)  And after taking these photos I pulled off all the buttons and re-sewed them in positions that hold the points at the bottom on equal level.  And the boy loves it.  He showed it to me when I visited and pointed out daddy's favourite plane and corrected my "blimp" with whatever it is officially titled.  The bag is a simple rectangle lined with calico and the shoulder straps work as a drawstring.  Next time I make one of these I think I'll use finer cord though.  The eyelets were fun to hammer into the corners at the bottom and I sewed them off so that little things or dirt and such won't get stuck in the corners around the eyelets on the inside. 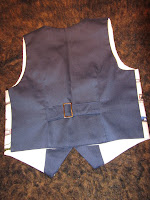 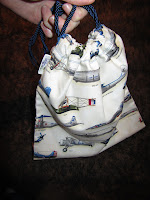 And then this week I finally pulled together the plan for a flag that I've had stored in the ideas bank for the same boy and his little bro for a Christmas present.  At their family's country house there's a wooden playground they call the Fort and the mum had mentioned in passing about finding a flag for it.  That's when the idea began. Months ago.  This is what I turned out.  I changed from the original plan of making a regular flag and went with a more knightly style.  Pretty basic design which is good since I was sewing it the day before I gave it.  Simple but effective I think.  Should look good on the fort and help inspire some knights and soldiers play. 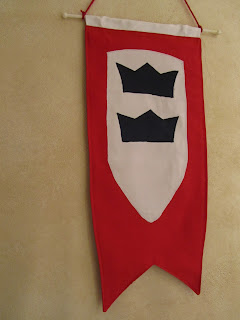