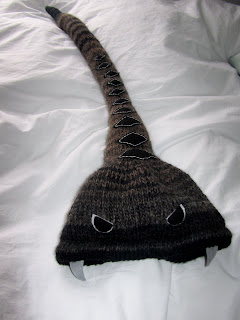 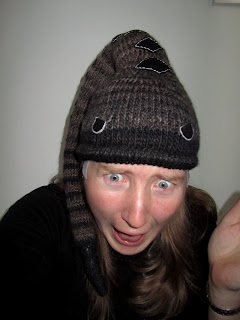 Yes yes. I had fun with this one. I was thrilled knitting every stitch and sewing on each decorative piece. Yes, and taking every photo. :) Such a laugh.

I bought thicker yarn so I could knit it quickly. I used Lang West in a perfect browny black. Just the right colour for a snake and a good boy colour. The charcoal yarn is left over from my wurm. I knit a black lip with it and then switched to the bigger needles and yarn. Instead of finishing off the top in a rounded beanie shape I just kept knitting in a smaller tube. Then switching back to the charcoal I did some knitting and purling rounds to make his rattle. I decided to stuff him lightly to give him shape and so crocheted a round circle which I attached on the inside to stop the stuffing coming out. 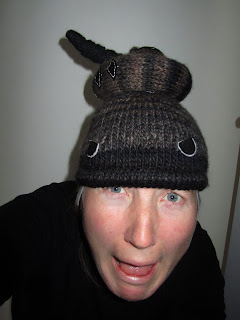 I then used felt to cut some fangs, wicked hunting eyes and the diamonds for his back. I think it all came together really well. My 8yo nephew has finally received it and sounds like he had just as much fun with it as I did. I doubt it will get a lot of use at the moment as he's in Australia where the heat is on. All the same, I think he did get the kick out of it that I believed he would. How could you not though? He he. 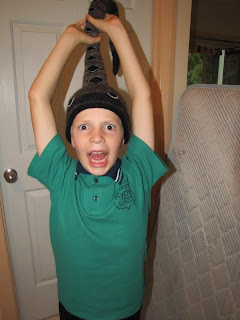