I had last Friday off so I decided to go to Ireland for the weekend. Coz I can. ^^ After I arrived and checked in to my hotel I wandered down through the streets (with a little tourist shopping on the way) to Trinity College. There I met Sinéad, an irish knitter whose blog I read. She took me to a cute little knitting shop called This Is Knit. It was a very inviting store with shelves clearly displaying a variety of delicious yarn. 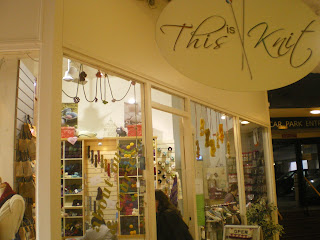 Sinéad showed me around pointing out different yarns that she liked and some irish crafted ones. Some of her other knitter friends met us there and they chatted while I looked around and chose what to spend some unexpected early received birthday money from family on. 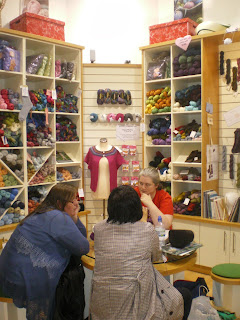 I decided on two skeins of Malabrigo in Atardecer (about sport weight/5ply) which is 51% Silk and 49% Merino Wool. Warm and so soft. I quite like the colours and I'm currently thinking of making some kind of cowl. I also bought two balls of Studio Donegal Aran Tweed in yellow and grey. This 100% wool was spun in Ireland partly using irish wool. Aparently irish wool isn't great for knitting on it's own and is mostly used in making carpets. 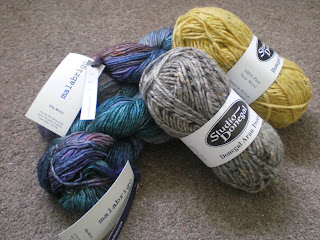 Once my shopping was done, we went to Cafe Manila for some Filipino food. It was nice food, once I decided what to have, and we chatted for ages about all sorts and had a good laugh too. And of course we all pulled out our yarn works after the food was gone. :) Knitters. 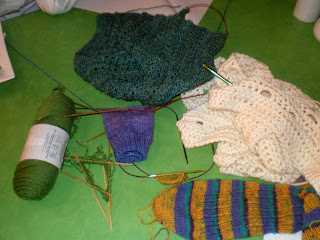 I had a most lovely evening with these ladies, one of whom is a friend of Ysolda Teague too! (I plan to buy her new knitty pattern book Little Red in the City.) They were great fun and it was interesting to meet up with them. 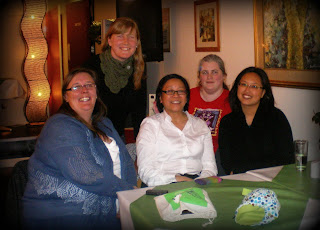 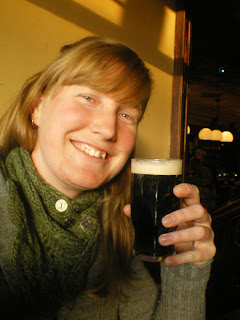 Most of us went out to a pub afterwards where I tried a Guinness. I drank my half pint. It's a done thing. And it won't be done again. Ha ha. Gross stuff but I'm not a beer drinker anyway. It was fantastic to hang out with some irish people and get a regular irish experience. If I'm ever that way again, I'm happy to go for another round.

The rest of my weekend can be read about here and here.
Posted by kelgell at 15:14