I have two (most wonderful) best friends.  They happen to have been born within two weeks of each other so I'm often thinking of present ideas simultaneously.  This year as they were approaching I decided in the spirit of the moment to knit them some fingerless gloves.  Such a wonderfully personal idea that of course was formed with not enough time between its birth and their birthdays.  Nevertheless, though late, both were warmly received.  ;) Knitted from the glorious Zauberball Stärke 6 in colourway 1537 Herbstsonne being 75% wool and 25% nylon and machine washable is always a bonus.  Mostly I just love the colours and the way the colour changes flow.  I had to use this yarn from my stash for Tab since she's rather fond of orange.

I knit this based on a fingerless mitten pattern on ravelry but I didn't actually follow the pattern so I can't remember which pattern it was.  I just made them based on the picture and added fingers.  The second I knit purposefully trying to start in the blue shade to somewhat match but there's not much of a pattern to the colour changes so it's that fun mismatched pair look.  I did try to keep the fingers in orange and the tabs with the contrasting blue button tops it off and adds that nice bunched up interest to the cuffs.  I also guessed the stitches for the second, lining it up with the first and estimating if I should start the thumb, string up the thumb gusset or if the fingers were long enough yet.  I find store-bought fingerless mittens only come to the middle knuckles if you're lucky so I made the fingers quite long with only the tips of my fingers poked out--providing finger warmth but with skin contact. 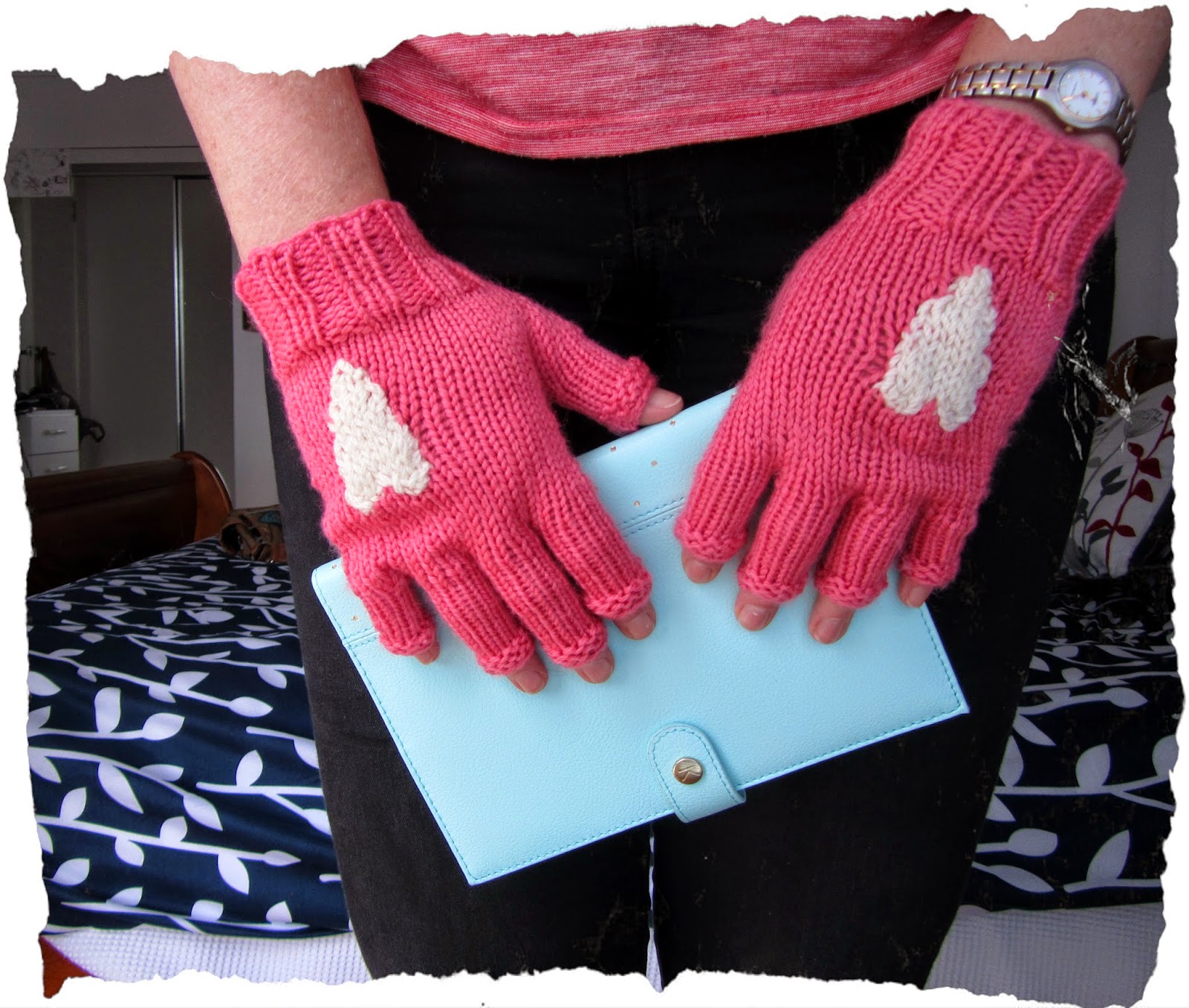 These ones were a total wing-it.  I knit them from Bendigo Woollen Mills Classic in colourway 752 Coral and I think some Magnolia maybe.  Little bit of white that I had left over from something else.  It's 100% wool so nice and warm for Australia's south end.  Vi's much more into pink than Tab and I, and sweeter too so the hearts suit.

I decided to try some intarsia though I've never done it before, nor read up on how to do it nor been instructed.  Ha!  That's me.  At first the heart was really bobbled even though I thought I tried to give it lots of slack at the back.  I ended up frogging it a bit and re-knitting it.  Even then it bobbled a bit but at knit's end I sewed in the tail around the edge of the heart shaping it more.  I steam ironed it once it was all complete and that flattened it nicely heightening my happiness with my efforts.

This time round I recorded each row I knitted making the first glove take a long time to knit.  But it also made the second glove much easier and quicker.  I found that I knit the fingers perhaps a little tight as the ends of my fingers noticeably darkened with slow outflow of blood while I was weaving the ends around about to close the gaps inbetween the fingers.  I think the ironing helped with that and Vi has slightly skinnier fingers than I do.

In all I'm happy, they're happy--we're all warm and happy. xxoo

Older Post Home
Subscribe to: Post Comments (Atom)
I thrive when I'm creating. Over my years I have created many things of all sorts and continue to do so. This blog is to share my creations and other attempts with anyone who is interested in creative ideas.