I leave my hometown in two weeks. Two weeks!! I'm beginning to pack and had a few pens floating around. So last night I pulled out my sewing machine and chose some fabric from my collection and had a little bash. Poor mishandled fabric. With a little bit of thought--really just a little--I started hacking fabric, ironing some heat'n'bond on (to hold it still and add some stiffness), and sewing here and there. I was aiming for something small and skinny. It was trickier than I imagined but I did come to some sort of conclusion. It's by no means a masterpiece but it will suffice. 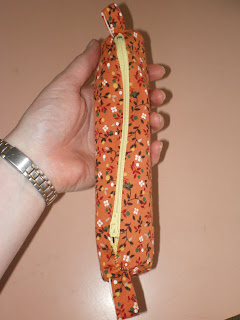 My ideas were a bit flawed. It was hard to sew it skinny on my machine. The outcome was bodgy job. Wonky zip and rough sewing. One tag is twisted. I had to hand sew each end of the zip where there was still open gaps because of misplanning. 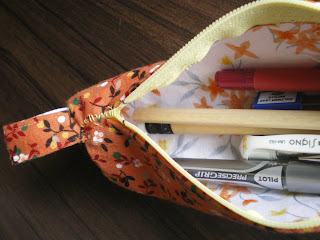 In after thought I could have done the lining different so the inside zip edge was covered too. But it was a quick decision started a bit late in the evening for a decent job. Ha ha. It will hold my pens though so it will do it's job. I have one more little craft project and then I probably won't do any more until I'm on the plane to the UK.